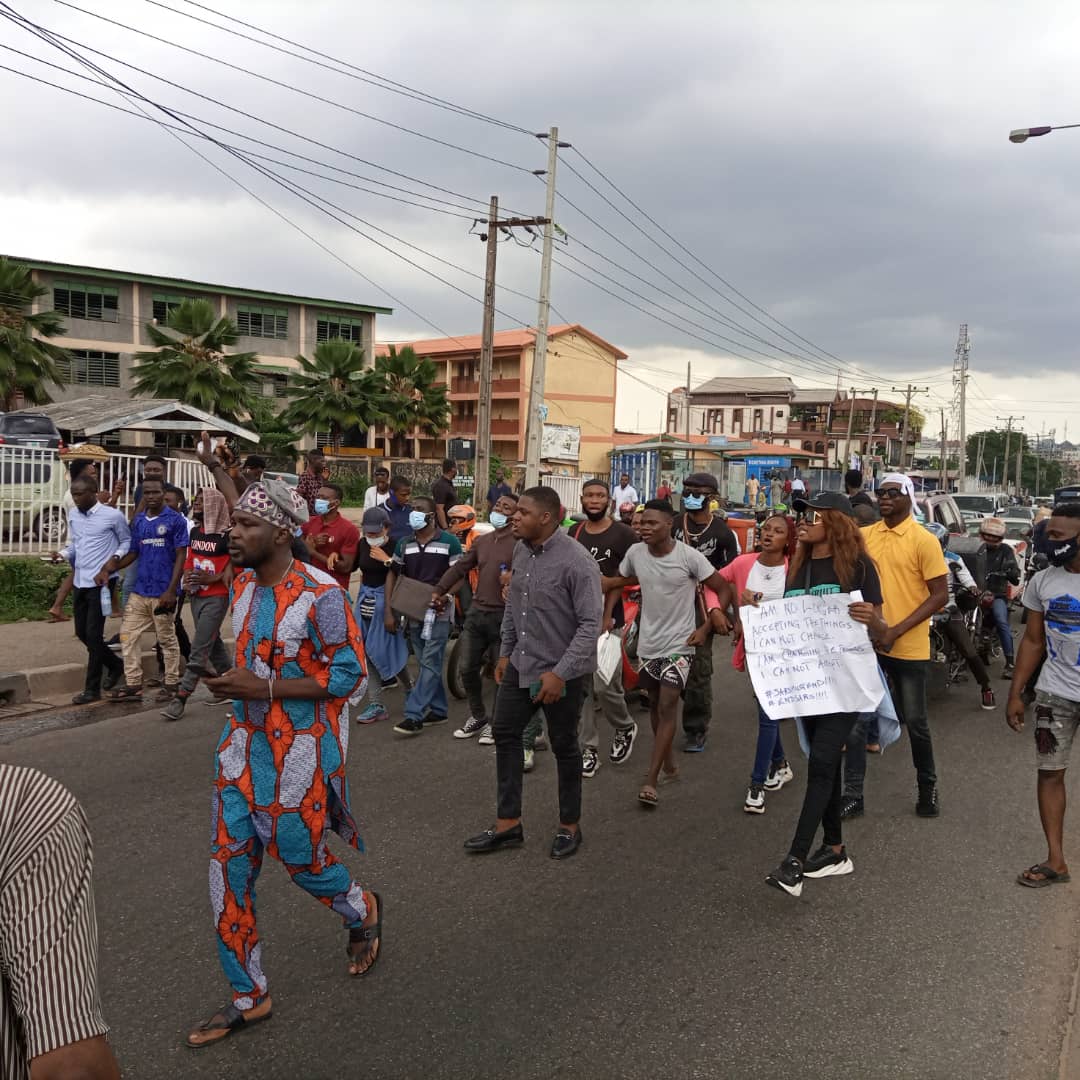 In what would have led to destruction of lives and property today, in Igando, a sprawling town in Alimosho Local Government Area of Lagos State, it was averted by the meticulous handling of the situation by the police, as no fewer than 1000 youths mostly students of higher Institution, took to the streets in Igando area, protesting “police brutality”.

An eye witness account has it that by 10.30a.m, youths, whose majority are said to be students from the Lagos State University ( LASU), stormed Igando and it’s environs, barricaded the Igando- Iyana – Iba expressway.

They were clenching their fingers into the air denouncing ” police brutality”. Within seconds hundreds of miscreants and idle hands joined them, attempting to wreck havoc on innocent persons. The intent of the miscreants to hijack the protest for their nefarious activities was, however, nipped in the bud by the Divisional Police Officer, DPO, for Igando police station, Mr Taiwo Kasumu.

He passionately appealed to the protesters to reason with the authority that have placed a ban on SARS, the subject of protest Nationwide. He enthused those who claimed that they were protesting “police brutality” and not #EndSARS, that the police are equally been brutalised too by the society. He enjoined them to be law abiding citizens as the future of the country lies in their hands because they are the leaders of tommorow. They were however Pacified by the soothing words of advice from the DPO . Before they left the area, their leader whose name was simply given as Atty, urged the DPO, to convey their message to the police authority.

#Endsars Protest Update ; “I Killed Your Son And nothing will happen” – Woman Recounts The Horrifying Death Of Chijioke ILoanya By...

ONLINE EDITOR - September 13, 2020
BY ; BAm ADE   Ibadan. Sunday, December 23 2001. Its evening and I am attending to patients in my hospital, Cornerstone Medical Centre located in...

NEWS ALERT ; A Nationalist and Afenifere Leader dies at 94 years..…....

ONLINE EDITOR - June 1, 2020
By ; BAM A (CHAIMAN, COUNCIL OF WORLD EX-PRESIDENTS) ON ADESINA SLAVERY IS ALIVE AND KICKING About 90% percent of the world's cocoa is produced by ivory...

ONLINE EDITOR - June 1, 2020
By ; BAM A   At a time Nigeria seems to be wondering in wilderness of political, economical and social blindless occassioned by over half a...

ONLINE EDITOR - May 27, 2020
By ; Bamigbala Adekola Scopenews.com.ng   A veteran Journalist Lanre Alfred is a Nigerian celebrity journalism practitioner, businessman author and publisher of The Capital, and owner of...

ONLINE EDITOR - May 16, 2020
By ; Bam A Scopenews.com.ng The Governor Fayemi led government of Ekiti state, Nigeria has approved the appointment of Prince Adekunle Adeagbo from Ile-Iyaba Ruling House...