SCOPENEWS NIGERIA
Home TRANSPORTATION AND MOTORING NEWS UPDATE !!!!! VIRAL VIDEO OF A MAN WHO DROVE ON... 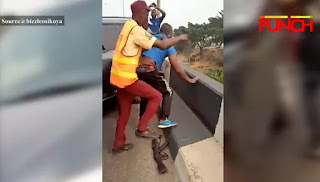 Nigerians have expressed mixed reactions over the tipping of a policeman over a bridge by a yet-to-identified driver in Lagos State.In a video that surfaced online, the driver was seen evading arrest by officials of the Lagos State Traffic Management Authority. Police officers

It was gathered that the policeman, who fell into a canal, was injured and has been hospitalised.

According to the Senior Special Assistant to the Governor of Lagos State on New Media, Jubril Gawat, the police officer broke an arm and in critical condition.

He, however, faulted those supporting the action of the driver, saying that he committed multiple offences.

He tweeted, “The officer is not dead. He broke an arm and in critical condition.

“I will personally investigate this and the driver must face the Law FULLY for committing MULTIPLE Offences.”

Reacting to the incident, Wale Adetona @iSlimfit said, “The driver was completely at fault. Let’s not make excuses for him. I know the LASTMA guys can be so unruly too but the driver shouldn’t have resisted arrest.”

@iamdodo said, “It shouldn’t have escalated to this stage if the officers are provided with necessary tools. Training them on how to de-escalate tense situations would go a long way. However, the driver must face the law!”

Dami added, “Everybody at that scene should be charged. LASTMA and police need to learn how to behave. Send a ticket to him or run his plates, find the owner of the car, and fine the owner. When he wants to renew his license or collect his tax clearance, he will see he owes the government.”

Lawrenzi replying @Mr_JAGs said, “You don’t have the right to investigate this, let those saddled with the responsibility do their Job, you can ensure justice is served.”