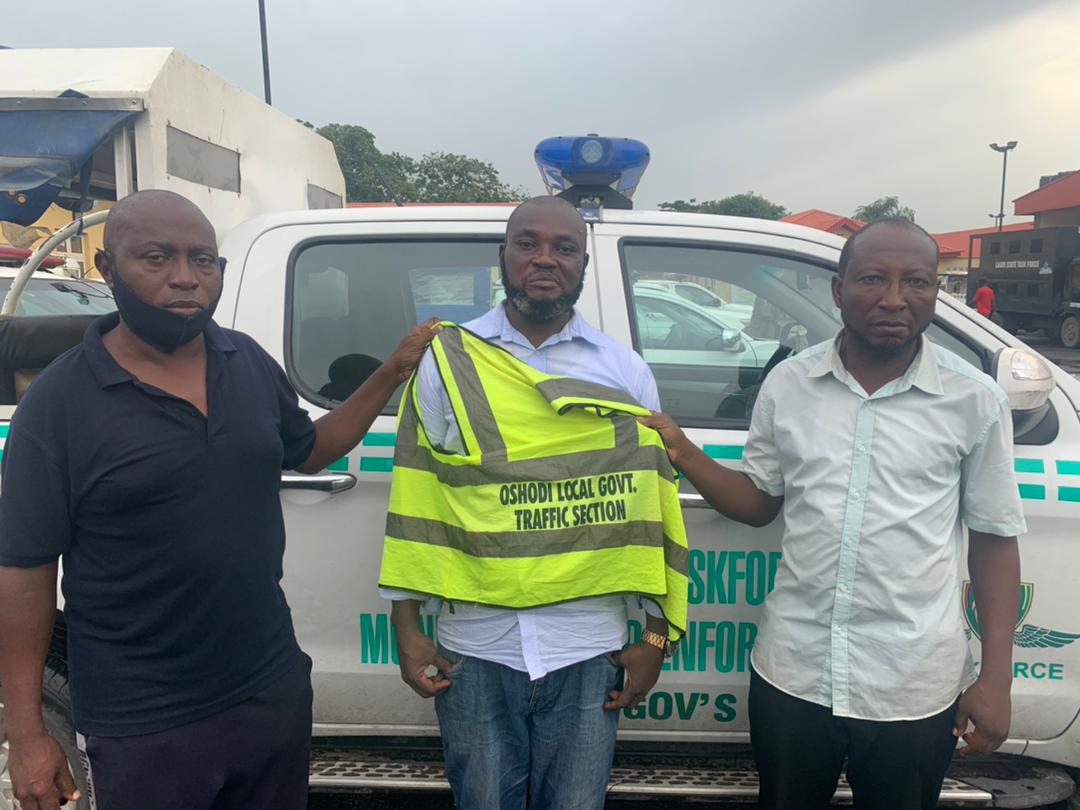 The ramping trends of fake Lagos Collectors is becoming more incesants    and Lagos State Government agencies are all out to stamp out the trend and make the offenders to face the Music and be jailed for denting the government image in the fight against bad vices in the society .

Lagos State Environmental and Special Offences Unit (Taskforce) has arrested three suspects posing as Local Government Traffic officers for extorting motorists in Oshodi.
The suspects, who claimed they are working with Oshodi – Isolo Local Government, Oshodi were arrested this afternoon on the orders of the Chairman, Lagos State Environmental and Special Offences Unit, CSP Shola Jejeloye after receiving complaints from some of their victims.
The suspects arrested include: Samuel Oyegbule (52), Olayiwola Thomas (53) and Kola Taiwo (47).
The suspect had yesterday extorted N25,000:00 from one of their victims for obstruction. Another victim equally alleged he was extorted of the same amount the previous day.
According to the first victim who does not want his name mentioned in the press, ‘they walked up to my vehicle while waiting for traffic light in Oyetayo Street. They knocked on my side glass and I wound down to listen to them. They said I have committed a traffic offence and I was forced to Oshodi – Isolo Local Government Secretariat, Oshodi, where I was made to cough up N25,000 as fine”.
The second victim, a bolt driver, said “I was arrested for dropping my client in front of his house in the inner street of Oshodi. It wasn’t a major road or expressway or where there are bus stops. They refused to listen to my explanation. They fined me N25,000.
The victims alleged that the suspects select vehicles they know can pay their charges before arresting them in trumped charges and forcing them to Local Government headquarters to make payment.
“They also brought into the same place several other vehicles arrested in the same manner like mine and they were made to pay as well as. Some of them were made to pay a higher amount”, one of the victims added.
Warning other touts and persons who illegally issue tickets to motorists on public roads and streets, CSP Jejeloye noted that Taskforce would continue with the arrest of miscreants posing as council officials to extort road users.
“I have received a lot of complaints and we have taken time to analyse them. We have made our findings too. Lagos State Government would not tolerate such excesses”, he added.
Femi Moliki
Head, Public Affairs Unit
Lagos State Environmental and Special Offences Unit (Taskforce)