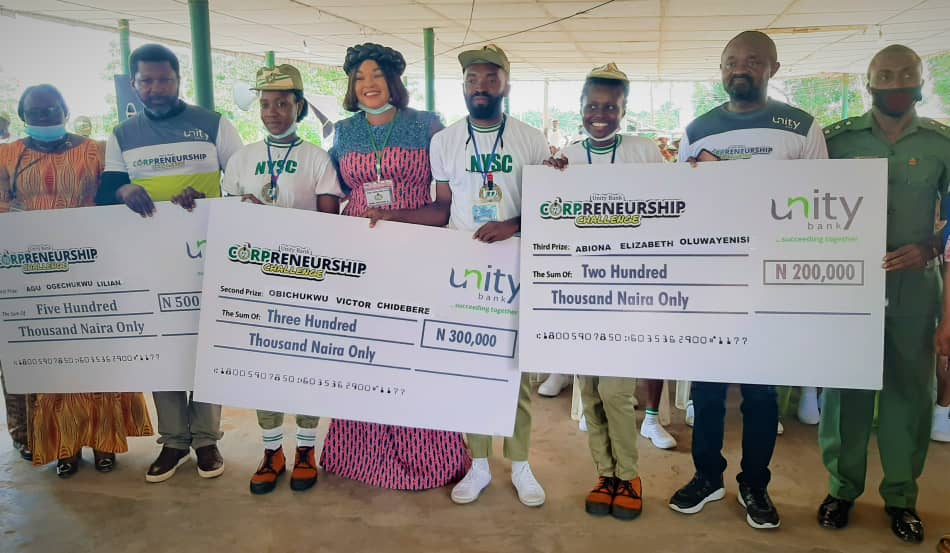 The banking industry is a big sector with different Banks and banker’s alike but Unity Bank Plc stand out with is products at all times .

The 30 winners who won cash prizes totalling N10 million emerged during the final business pitch in the fifth edition of the contest for NYSC 2021 Batch A Stream II Orientation Course, which took place simultaneously across ten NYSC camps in Lagos, Ogun, Benin, Abuja and Akwa Ibom.

Some of the winners included Monday Love Sheba, Adeoye Janet and Essien Nsikak in Bayelsa camp, while Agu Ogechukwu Lilian, Obichukwu Victor and Abiona Elizabeth emerged as the winners in the Akwa Ibom State camp.

The initiative attracted massive interests among the corps members, as over 1000 applications were received but only 100 were shortlisted for the pitching session from where the thirty winners emerged.

The contestants’ business plans which ranged from fashion, fish production, poultry farming, retail chains, piggery to beverages were assessed on originality, marketability, future employability potential of the product and knowledge of the business.

Recall that Unity Bank debuted the Entrepreneurial Development Initiative in 2019, to specifically target corps members, as part of efforts to contribute to job creation in Nigeria. The initiative has produced 48 winners since 2019 when it debuted.

Speaking at the finale in Akwa Ibom State, the overall winner, Lilian Agu, a graduate of Mass Communication and Chinese Language from Federal Polytechnic, Oko expressed gratitude to Unity Bank for the opportunity to actualise her dream of establishing a fashion outfit.

“With this money, I plan to buy an industrial machine, rent a studio, buy a generator and buy some fabrics and start from there. Unity Bank has made my dream come true. I am not from a rich home and I have been dreaming and working hard to start a fashion business, but this grant has made that dream a reality. God bless Unity Bank,” she said.

Also, speaking during the finale in Akwa Ibom NYSC camp, the Divisional Head, Retail, SME Banking and E-Business Directorate, Unity Bank Plc, Mr. Olufunwa Akinmade, said the competition has proved to have a great impact on youth empowerment in the country.

“The Unity Bank Corpreneurship has a very positive impact, not only for the corps members but for the entire youth population in Nigeria. It is a way to support the young men and women who are just graduating from university to grow.

“You will agree that it is not easy today to come out of the university and get a paid job, and so at this tender age, it is good that they imbibe that culture of entrepreneurship, and then with the financial support that they get from Unity Bank and the knowledge that they have acquired through the competition, they will be able to grow from job seekers to employers of labour.”

Represented by Mr. Etop Ukpe, the Uyo Regional Manager, Mr. Akinmade reiterated that “The grants are not a loan and the winners are expected to channel the funds to profitable ventures to achieve the objectives of the scheme.”

Going down memory lane, Mr. Akinmade recalled that what started in 2019 with a pilot in four states have now expanded to ten additional states and is well on its way to achieving national coverage.

He said: “We started Corpreneurship in 2019, with a launch in Lagos and in three other states which included Edo, Ogun, and Abuja. So, today we have expanded it to ten locations, and it has been hugely successful.

“This is a programme that will stand the test of time, but all we are doing is to support NYSC corps members to start their own business no matter how small and then grow with it. Unity Bank will continue to be part of their journey, to offer them a startup capital as well as business mentorship.”